Make penne alla vodka with smoked salmon one of your go-to midweek meals. It's easy to make and well tasty - the whole family will love it.

It would be an understatement to say that penne alla vodka with smoked salmon is one of my family's favourite easy pasta recipes. We have this dish at least once each month and there are often cries for it to appear more often than it does.

This dish is really a reinvention of the classic penne alla vodka, which contains neither smoked salmon nor extra veggies. Mine contains smoked salmon, cherry tomatoes and roasted peppers, just to add a little extra nutritional value to an already splendid serving of comforting pasta.

What is Penne Alla Vodka

Quite simply, penne alla vodka consists of penne pasta tossed in a tomato and cream based sauce that has been laced with Vodka to add a peppery depth of flavour and to soften the sweetness of the tomatoes and the richness of the cream.

As with all good classics, various recipes exist. Some households like to add bacon to their alla vodka sauce. For others, it's a touch of chilli to ramp up the heat that the vodka imparts into the sauce. I've even come across recipes incorporating peas.

How to Make Penne Alla Vodka with Smoked Salmon

The best way to draw out that peppery taste and balance the sauce is to add the vodka and then cook it to get rid of all but a trace of the alcohol - rather like the addition of wine to a risotto. For this reason, I like to add my vodka after frying the shallot but before adding the tomatoes.

Once the entire dish has cooked, most of the alcohol has burnt off, but those enticing flavours have been well and truly released into the sauce.

This recipe is one that meets my needs on many a busy weeknight but it's tasty enough to make it onto our weekend menu too when we fancy a dose of easy comfort food:

Can I Serve Penne Alla Vodka to Children?

Hand on heart, most of the alcohol in my recipe is burned off during the cooking phase if you follow my instructions. So yes, my penne alla vodka with smoked salmon is suitable for children.

I'll caveat this by saying that I have seen a few recipes that add the vodka at the end of the cooking process. Clearly, this is an entirely different approach to creating an alla vodka sauce and I would be much more cautious of serving this to children.

This is a very adaptable recipe. Try out the following changes:

I always recommend a quick taste before serving any saucy dish and this step is especially important in this recipe. If using smoked salmon, bacon or pancetta, only a little - if any - extra salt will need to be added, since these proteins are renown for their saltiness. A good pinch of salt may be required if using chicken or going entirely vegetarian though.

To save time use jarred roasted peppers - just rinse and pat dry on kitchen towel before using. Alternatively, chop a fresh pepper finely and add to the pan once the onion has softened and cook for a few minutes. The resulting sauce will have a little more texture to it, but it will still be very tasty.

All-in-all, pasta alla vodka with smoked salmon is an easy-to-make recipe that will soon win a regular place on your supper repertoire. It's deeply comforting in the winter but yet manages to be light enough to carry through to summer dining. That's a pretty magical quality for any recipe to possess. 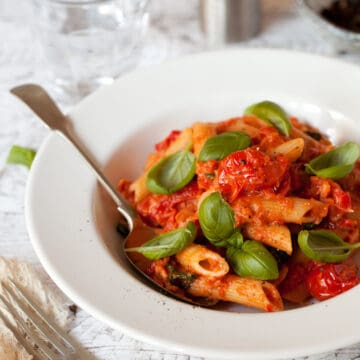 A fresh red pepper can be used in this recipe. Deseed and dice it finely, then add to the pan after the shallot has begun to soften. Let cook, stirring occassionally for a few minutes, until it too begins to soften. Expect the sauce to have more texture than it would do were a roasted pepper used. Substitute the smoked salmon for a cooked fillet of salmon or chicken breast. Flake/ chop before adding to the pan in step 6 Alternatively use bacon, pancetta or uncooked chicken breast instead of the salmon - cube and add to the pan once the shallot has softened and cook for 2 minutes before prceeding to step 3 of the recipe.