Blackcurrant Pies are the perfect marriage of a sweet, tart & jammy homemade blackcurrant filling paired with crisp, golden homemade pastry.  My pies are deep filled for an extra bite of fruitiness. Eat them on their own – warm or cold – or elevate them into dessert status by serving with cream, custard or ice cream. Blackcurrant pie is sweet comfort food at its best.

When it comes to baking a pie, I often prefer to stick to the classics, since I find simple fruit pies homely and comforting. These Deep Filled Blackcurrant Pies are fine examples of the type of pie I’m likely to bake.

Fruit pies and the little black dress have a lot in common. Both are timeless, often making appearances in restaurants or cosy suppers with friends and they can re-invent themselves so many times that they will never go out of fashion.

I grew up in an era when Mr Kipling ruled the supermarket shelves with his Individual Cherry Bakewells and Deep Filled Pies. It’s Mr K’s pies that are really the inspiration behind my Blackcurrant Pies.

If I’m being honest though, I’m really not sure if my kids have ever had a Mr Kipling pie as we always bake our own.

We bake just about everything we can ourselves. That’s partly because I love to bake and so do my kids. But it’s also because we don’t eat sugary desserts everyday. So when it comes to treat time, I make sure we indulge in style.

So move over Mr Kipling. I’m talking about lightly, crisp, homemade pastry sweetened with just a little touch of sugar and then filled with a sweet, tart, deep purple blackcurrant compote. That’s the right way to make a blackcurrant pie.

Where can I find this Fruit?

Blackcurrants in the UK are synonymous with summer. And it is a flavour British people are more than familiar with. Over my blogging years though, I’ve noticed that Americans have rarely heard of them. So I decided to delve into why.

I have a bit of bad news for my US readers. Blackcurrants are not widely available in America at present. They were farmed in the US until the early 1900s. At this point, blackcurrants were considered a threat to the U.S. logging industry, so a ban on growing them was imposed.

They are no longer considered a threat but the federal ban that curtailed currant production nationally for nearly a century has left a lasting mark. Blackcurrants remain largely unknown in the United States.

I do have a tiny bit of good news thought. The federal ban was lifted in New York State in 2003 and currant growing is making a comeback in New York, Vermont, Connecticut and Oregon – look out for these classic beauties if you are in the area.

In the UK blackcurrants are widely available through the summer months. Find them at Pick Your Own Farms, farm shops and supermarkets. And in the colour months try the freezer department, especially in farm shops.

How to Make Individual Blackcurrant Pies

Some people fuss about topping and tailing blackcurrants before cooking with them. Honestly, I think life is too short.

Whenever I make blackcurrant jam or these individual pies I just give them a rinse and quickly remove any green stems. Then I get on with the cooking. I’ve had no complaints yet.

The next stage is the pastry making. I use a simple shortcrust pastry here and sweeten it with a little bit of sugar. There are just 4 steps to follow:

Once the pastry has chilled it can be rolled out and cut into circles to fit your tin.

Since I’m verging on greedy, I make these individual pies in a muffin tin so that I can pile a large amount of that luscious jammy blackcurrant filling into each pie.

And I really don’t worry if a little of that filling oozes out of a few pies. I think a little mess adds to the homemade charm of these blackcurrant pies.

Can I Make One Large Pie Instead?

Of course, the recipe can also make one large blackcurrant pie rather than individual pies.

What Should I Serve with These Fruity Pies?

Enjoy these blackcurrant pies just as they are or serve them with cream, ice cream or custard to turn them into a comforting full-blown dessert.

For the ultimate indulgent treat a scoop of clotted cream works wonders. This rich cream cuts through the acidity and sweetness of the blackcurrant pie filling superbly.

Are you looking for more blackcurrant recipes?

How about these drinks: 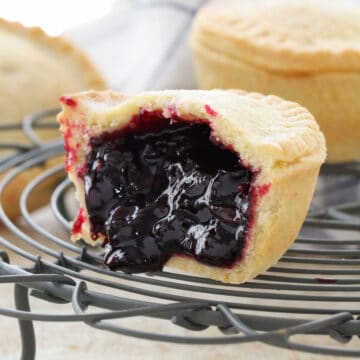 Prevent your screen from going dark

To ensure a perfect fit, I used a piece of string to measure from one side of the pie/ muffin cavity, down into the hole and back out to the top of the other side. I then measured this length against a ruler. My muffin tins required circles of 11cm diameter. That was larger than any pie cutter I had, so I improvised with a kitchen bowl and cut around it. These pies have a homemade appearance. A little leakage of the filling will happen on some of the pies, but I like that. It shows they are handmade.