This Cinnamon Apple Cake is a light and bouncy sponge cake loaded with nuggets of home dried apple. Adorned by delectable salted maple buttercream, this is one elegant cake to fall in love with.

This post contains affiliate links. As an Amazon Associate, I earn from qualifying purchases.

A few weeks back I ended up leaving some apples in the fruit bowl for a bit too long. By the time I got around to looking at them, they had lost their firm and crisp appeal. These apples were destined for a fruit compote until I developed the urge to bake a fancy cake.

Now, apple cakes are a very lovely treat and there are plenty of versions available. A great many recipes use uncooked apple stirred directly into the cake mix. Since apples give off a lot of liquid during cooking, these cakes will be squidgy and very moist – almost wet, but in a good way. This kind of apple cake is screaming out for a generous pouring of custard and they make the pudding of my dreams following a Sunday Roast.

But I wanted to create an apple cake that was more in-keeping with afternoon tea. Something that could tolerate a little buttercream and withstand an elegant garnish. So, I took those apples, sliced them and packed them off to the oven to take a long slow cook.

How to Make Apple and Cinnamon Cake

Using dried apple is the perfect way to incorporate this fruit into a traditional sponge cake. Once the fruit has been baked, making this apple cinnamon cake is as easy as making a regular sponge cake.

The result is a light and bouncy sponge with nuggets of apple in every bite. It’s moist but definitely not wet.

Cinnamon and a little nutmeg, both firm friends with apples, tumbled into my mixing bowl too. And, since we are now well and truly into autumn, they are especially welcome in this apple cinnamon cake.

To accentuate these seasonal flavours further, I paired my apple and cinnamon cake with salted maple buttercream. That’s regular, fluffy buttercream with a dollop of maple syrup and a touch of finely ground salt partying hard in there. The salty undertones temper the overall sweetness of the buttercream and the maple syrup adds a mellow dimension to it. This is the kind of buttercream that is hard to resist.

Being truthful, my cake decorating skills are not top-notch. I can just about decorate a layer cake and get it looking reasonable. Just don’t ask me to get it perfectly smooth or do anything too fancy. Am I resonating with a few of you here? Well, you’ll be pleased to hear that the look I’ve achieved on this apple and cinnamon cake is incredibly easy to replicate. If you like easy cake decorating, this is the way you should go:

And if you really hate piping, you can of course just pile your buttercream onto your cinnamon apple cake and spread it out with a knife. You are in a judgement-free zone here.

It’s also perfectly acceptable to use store-bought dried apple. I made my own because I had apples to use up but the perk of homemade is that you can select the apples to use. I’m particularly fond of Pink Lady apples because they are crisp, sweet and slightly tart and the blush skin colour adds a little extra beauty to the look of the cake. The flavour really shone through once I’d dry baked them too.

You can also use the batter for this apple cinnamon cake to make cupcakes.  I did bake one when I remade this cake for the photographs recently. I left all the cakes to cool whilst I took my daughters to their swimming club. When I got home the cupcake had been scoffed by my husband, innocently thinking I’d baked a treat just for him. Hmm. So, no photo but they do make lovely cupcakes – so I’m told anyway. 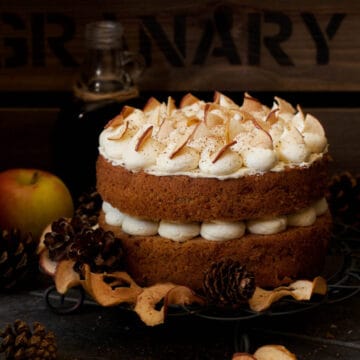 For the Dried Apples

For the Salted Maple Buttercream