Sticky Toffee Cupcakes are as soft, squidgy and irresistible as the classic pudding they are mimicking. Each cupcake is full of tender dates and comes topped with gloriously rich and buttery toffee sauce along with a little buttercream. They are bound to be a hit with family and friends.

I’m not one for making big decisions. Or even small ones come to think of it. My case in point is the recipe for today’s treat of sticky toffee pudding in cake form. It has been ready for quite some time but I just couldn’t decide whether I should present it to you as sticky toffee cupcakes or sticky toffee layer cake. Honestly, both work just as well as each other, but in the end, cupcakes won out. Just this once – not many desserts get me as excited as a pretty layer cake.

My decision to go with Sticky Toffee Pudding Cupcakes was really based on the time of year and that really, these morsels would be ideally suited to attend a bonfire party. And… if you’ve got a sparkler in one hand, that leaves the other hand free for a cupcake. Yes? But not for layer cake, plate and fork. Noooo? See, even when cake is involved I think sensibly and safely.

So cupcakes won out… for now at least. I may be tempted to pull together the layer cake version at a later point too, since Sticky Toffee Pudding anything is a really good idea.

Okay, back to the cupcakes. First, let me tell you about them. Just like the dessert, these sticky toffee cupcakes contain soft and squidgy chunks of dates inside of the sponge.  I go with tradition and soften my dates with hot water and Bicarbonate of Soda before adding them to my cake batter.

Confession: I was hoping to wow you with an exact explanation of why this is a necessary step. However, all I’ve discovered is a seemingly made-up explanation than it tottifies the dates. I’d suggest putting that nugget of potential mis-information aside and instead be assured that the water and bicarb do plump up the dates and soften them very nicely indeed. It’s almost as if they have been stewed.

Once the cakes are made, it’s on with the laborious task of dousing them in plenty of toffee sauce. My life is so hard sometimes. (If you like toffee or caramel on your cupcakes you should also check out my coffee caramel cupcakes.)

When the cakes have cooled, a little piping action is required to ensure a pool of sauce can be added along with the buttercream. Incidentally, did I mention that the buttercream has a little of the toffee sauce blended in? Yup. I thought that might go down well.

Anyway, the piping is not as scary as it looks. I am terrible at piping, so I tend to muddle through the best I can. But I’m quite proud of what I came up with for these Sticky Toffee Pudding Cupcakes.

After hunting around in my set of nozzles, donated to me by my Mum who is an excellent cake decorator (Hi Mum), I soon realised that a puddle of sauce in the middle could not be attained if I relied on my usual wide nozzle and employed my gigantic splodge of icing technique. Something much more delicate was needed. So I picked up a Wilton 30 closed star nozzle and started to experiment.

How to Decorate Sticky Toffee Cupcakes

I’ve made some step-by-step images, to show the less capable pipers amongst us (me) what needs to happen to replicate my piping:

And that’s it. These sticky toffee pudding cupcakes are ready to serve. Really, those little stars can hide a multitude of piping sins.

These cakes are deliciously squidgy, with a deep and comforting flavour. The muscovado sugar & those delicately tender dates in the cake batter along with the rich & buttery toffee sauce work together in cupcake form just as harmoniously as they do as a satisfyingly filling winter pudding.

PS. If you can explain the science behind the dates + hot water + bicarb step, or even tell me that tottify is a legitimate word and what it means, I’m all ears.

(Update: my lovely friend Sarah has informed me that the bicarb serves to neutralise the acidic components of any tannic acid in the dates. This makes them less astringent and much more pleasant to eat. She has not, however, been able to clear up the matter of whether tottifies is a bona fide word though.) 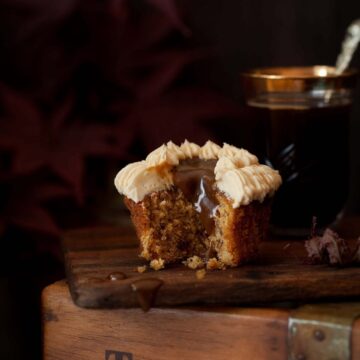 For the Sticky Toffee Sauce