Sorting Hat Cupcakes are immense fun for Harry Potter fans. Each brown sugar cupcake is filled with a stash of red, green, blue or yellow candy drops, (representing each of the 4 Hogwarts houses) which remain hidden under a swirl of butterbeer flavoured buttercream until bitten into. It's a fun way for fans to find out their house.

One thing I never thought I'd find myself writing about on my blog is a themed cake. Believe me, I have had to rise to the challenge of baking plenty of whacky party cakes over the years. But I never expected one to make it onto LittleSugarSnaps. It's just not what I normally like to write about. But here I am, laden with a large stash of photographs for some cupcakes that remain eternally popular with my children and their friends: Harry Potter Sorting Hat Cupcakes.

Let me get straight to the point. These cupcakes are the epitome of edible fun. They are guaranteed to get excitement levels up for any Harry Potter fan (even adults).

What could be more fun than biting into your Harry Potter themed cake, discovering you have been placed in your favourite house (or not) and then comparing how your friends have fared. These Sorting Hat Cupcakes are a brilliant choice for serving up at a Harry Potter themed party.

The recipe for these Sorting Hat Cupcakes is certainly one that has evolved since the first time I made a batch.

My original bake was inspired by those created by Sugar Bean Bakers. I used my standard chocolate sponge recipe and regular vanilla buttercream. But since my children have a penchant for piñata cakes, I did switch out the sweet cream filling and used M&Ms in its place. However, after sitting for a while, the colouring from the sugar shell on the sweets began to bleed.

The kids don't seem to mind, but this kind of messiness really niggles away at me.

Two more large batches of Sorting Hat Cupcakes followed a few months later for birthday parties. This time I opted for candy melts in place of M&Ms. I melted the candy down and piped tiny drops ready to fill the cakes. Bingo. No leaking colours this time around - the colour remained consistently punchy & vibrant.

More recently, I decided to rethink the cake and the buttercream to give them both a flavour Harry Potter would approve of - so butterbeer cupcakes emerged.

What is a Butterbeer Cupcake?

Butterbeer is a drink served in the Leaky Cauldron in the Harry Potter series. It is described as tasting of butterscotch and cream soda.

I used this description to turn my sorting hat cupcakes into the ultimate treat for Harry Potter fans - butterbeer cupcakes.  To do this I did 2 things:

These butterbeer cupcakes are sure to stand out in terms of flavour and looks.

How to Make Harry Potter Cakes

The base cake recipe is really an open book. I have presented a recipe for brown sugar cupcakes, since this adds a delicious caramel edge to the actual cake, tying in well with the butterbeer frosting. However, your favourite vanilla or chocolate cupcake would work well too. Once baked there are 4 easy steps to success:

How to Decorate Sorting Hat Cupcakes

I had always intended to pipe some sorting hats from chocolate and stand them up in the buttercream. However, in the final hour I came across a tutorial for making chocolate coins from wax seal stamps. And oh, sweet joy, Milly had a pair of Harry Potter wax seals bought her for Christmas. One for Hogwarts and one for Gryffindor.  These cakes were just meant to be.

Similar stamps are available to purchase on Amazon, but of course, these Sorting Hat Cupcakes can be decorated in various other ways:

And that's the evolution of these Harry Potter Sorting Hat Cupcakes in a nutshell.

My children have been served these cakes numerous times now, but the thrill of biting into one and finding their Hogwarts House does not seem to diminish. These Harry Potter cupcakes remain hugely popular. Naturally, they both always want to get red for Gryffindor. And, predictably, each child guffaws at their sibling should they end up with a Slytherin cake.

They can just about cope with being labelled Ravenclaw or Hufflepuff. 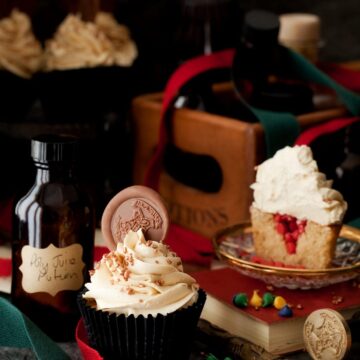 Jane Saunders
Sorting Hat Cupcakes are immense fun for Harry Potter fans. Each brown sugar cupcake is filled with a stash of red, green, blue or yellow candy drops, (representing each of the 4 Hogwarts houses) which remain hidden under a swirl of butterbeer flavoured buttercream until bitten into.
Do make the butterscotch sauce well ahead of time since it does need to cool and chill prior to being added to the buttercream.
5 from 3 votes
Print Pin Rate
Course: Baking, Dessert
Cuisine: Worldwide
Prep Time: 1 hour 15 minutes
Cook Time: 30 minutes
Servings: 12 Cakes
Calories: 487kcal
Prevent your screen from going dark

For the Brown Sugar Cupcakes

For the Butterscotch Sauce

For the Butterbeer Buttercream

For the Coloured Drops

For the Butterbeer Buttercream