A few weeks back I shared a recipe for a rather disarming layer cake based on classic vanilla and chocolate malt shakes. It's a work of delicious edible art, but the truth is that life does not always grant us the time or the excuses to make a fancy layer cake every week.

Cupcakes, however, are another matter entirely.

So I'm running with the malt shake theme one more time to bring you the recipe for these Vanilla Malt Cupcakes. There's nothing complicated about them. They deliver a classic and popular flavour in a reliably moist sponge cake recipe. Topped with classic buttercream (flavoured too with vanilla and malt) these goodies are as straight-forward as a bake can get. And, bonus, they come topped with crisp & crunchy Maltesers.

To ring the changes, I opted to make some supersized cupcakes using baking cups rather than classic cupcake liners. Not only do these cups give the cupcake a neat facelift they also make for larger cakes (oh sweet joy). I'd say that each cup is equivalent to 1.5 standard sized cupcakes. Of course, regular sized cupcakes can also be made - see the recipe details for how many of each size you can expect to make from the ingredient quantities listed.

Since this recipe is pretty easy, I only really have two tips to give you for these Vanilla Malted Cupcakes:

That's it for now though. Did you catch my Malted Milk Biscuits and my Chocolate & Vanilla Malted Milkshake Cake? I can't guarantee there won't be more malted milk magic in the future... I do tend to excessively brainstorm a theme once I'm on the case (thinking specifically of chai spice recipes here).

Have you made these cupcakes? How about sharing your gorgeous creation on Instagram – don’t forget to tag #littlesugarsnaps so I can see it too. 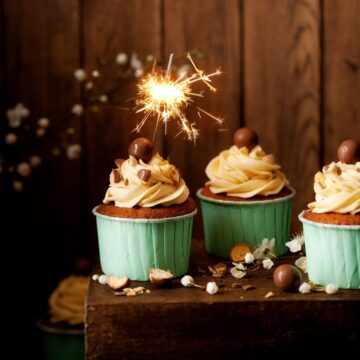 I have used standard Horlicks (malted milk powder) in this recipe. Ensure you do not pick a light version. Also ensure you do not use Ovaltine or a chocolate flavoured Horlicks. The cupcake cases shown in the photographs are larger than standard cupcake liners. They make cakes that are approximately 1.5 x the size of a standard cupcake. The cake mix as listed will make either 10 regular cupcakes or 6 supersized cupcakes buttercream measure. When it comes to the buttercream, there is sufficient to frost 10 regular cupcakes but you will need less if making 6 supersized cupcakes. Try making ⅔ of the listed buttercream recipe. Maltesers do go soft and stale quickly once cut open. For this reason, scatter Malteser fragments over the cakes just before serving to ensure the fresh crunch is retained.
Tried this Recipe? Pin it Today!Mention @littlesugarsnap or tag #littlesugarsnaps!
(Visited 145 times, 9 visits today)
« Custard Cream Truffles with Rhubarb
Twisted Violet Blueberry Gin Sour »