Richly fruited, lip-smackingly tangy and delightfully light. This Cinnamon Cherry Tea Bread needs no fancy adornments. It's easy to make and is sure to please even the choosiest of cake connoisseurs.

Tea Bread never really excited me until a few years ago when I spotted some on a hotel breakfast buffet table. It looked rather good, so I took a slice. That slice was soft, with a good crumb and it was bursting with juicy dried fruits. Then there were the intoxicating notes of tea & spices on offer. Free for the taking, if you like. In just one bite, my life-long abstinence from tea bread was put to rest. I was smitten.

Confession: Prior to this revelation, I’d incorrectly categorised tea bread as being dry – so dry you have to coat it in a thick layer of butter. I also thought it was too dull to be worth using my jaw muscles on to eat.

And I was brought up not to judge. I’m embarrassed.

I can only assume that as a very small child, I must have been served some shamefully bad tea bread. I can think of no other reason why I would have spent my adult life avoiding the stuff, when in truth, it's a gem.

In a bid to make up for the lack of tea bread in 95% of my life to date, I’ve created this Cinnamon Cherry Tea Bread. It is all you could wish for in a cake. There’s a lovely tartness from the cherries, which mellows nicely with the cinnamon and a touch of honey. I chose to soak the fruit in Ceylon tea, which tastes fresh with a subtle tanginess to it. I thought this tangy edge would match those tart cherries perfectly.

A chunky slice of Cinnamon Cherry Tea Bread is heavenly served just as it is. There is absolutely no need for a glaze or icing. However, if a decadent treat is what you have in mind, then a generous slick of lightly salted butter would go down a storm (I will never pass up the chance for butter).

And here’s the best bit. Whilst I’ve spent my life avoiding tea bread like the plague, my husband has spent his life eating tea breads and other form of fruitcake at ever opportunity. He will pass-up iced cakes any day of the week, but a fruitcake? Never. Leading on from that comes the acid test – what does he think of my Cinnamon Cherry Tea Bread?

He likes it. Big style.

I know that when my Husband asks me to make more of something, then what I’ve made really does work. He’s Mr ultra picky and will only say it’s good if it really is. So, I can tell you with 100% confidence that the recipe for this Cinnamon Cherry Tea Bread is a keeper - he wants some for his birthday. 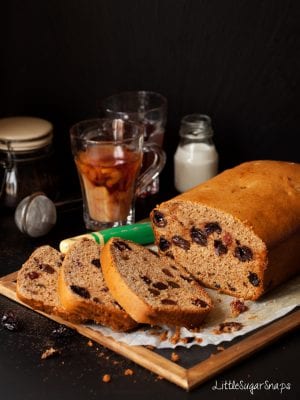 Tried this Recipe? Pin it Today!Mention @littlesugarsnap or tag #littlesugarsnaps!
(Visited 203 times, 1 visits today)
Previous Post: « Balsamic Strawberries on Brioche Toast
Next Post: How to create a Picnic worth heading outdoors for »