Rustic Fig Prosciutto Gorgonzola Crostini are quick and simple to prepare and taste superb. The classic combination of flavours is a winner and these treats make a great appetiser or party nibble.

Italians definitely have snacking down to a fine art. Before I headed off to Venice for my summer holiday I noted down countless places to pick up a light bite ranging from the savoury wonder that is deep-fried arancini, to some sinfully sugary sweet batter balls be-jewelled with candied fruit.

Two things were clear from my holiday planning:

I was right on both counts. But one thing I’m so pleased we did manage to squeeze in were some crostini served in a small back street bar.

This bar was simple and homely. Along with a few local wines and quality spritz, the only food on offer was crostini – all laid out behind the counter for customers to pick-and-mix from. The selection was varied, and interesting but it was all simply presented. Some might say rustic. You could say it was nothing fancy, but that would be wrong because each crostini we tried tasted so good.

I’ve always thought that crostini should be served on toasted bread, but it seems I’m wrong on that count. The ones we devoured in Venice were served on untoasted bread. Despite the bar being small, it was busy, so the trays of crostini did not hang around for long – I suppose that’s why the chef doesn’t bother to toast them.

After stuffing our faces we wandered a few doors down and got drawn into a wine shop-cum-bar also serving crostini. Exactly the same format and not a toasted slice in slight.

Crostini is thought to originate from medieval times when it was typical for Italian peasants to eat their meals on slices of bread instead of using crockery. I thought I should capitalise on this crostini induced laziness, so I’ve skipping the toasting ritual. After all, if the peasants could bunk off the pot washing, surely I can skive the toasting. And it’s clearly the modern Venetian way.

So today I’m giving you my quick and simple recipe for Fig Prosciutto Gorgonzola Crostini.

I do not toast the bread (I’m so far out). Instead I’ve used crusty baguette bread that serves up plenty of bite anyway. But I do take 3 minutes to make a speedy honeyed fig jam and that creates 1 pan to wash-up. (If making fig jam sounds too far removed from medieval times I have another option up my sleeve for you.)

The sweet figs, salty ham and slightly sour blue cheese play together as if they have been best friends forever. Maybe they have.

Whether you make the jam or not, a plateful of these Fig Prosciutto Gorgonzola Crostini can be ready in 15 minutes or less – washing up included.

To finish up, last week, when I introduced you to the Venetian Aperol Spritz, I promised you another Venice photo from my family archives. Here it is. This time it’s the view from the Rialto Bridge just before sunset (aka: Spritz o’clock). 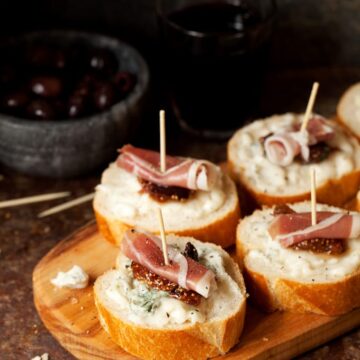 1. If you don’t want to make the jam chop each fig into 8 slices and lay a slice on top of the gorgonzola, then drizzle with a small amount of honey. Top with the prosciutto roll and serve immediately.
Tried this Recipe? Pin it Today!Mention @littlesugarsnap or tag #littlesugarsnaps!
(Visited 107 times, 1 visits today)