Crisp and crunchy gluten free pastry encases festive mincemeat in these Gluten Free Mince Pies. Go for a full pastry lid, dainty stars or a mixture of the two.

This post contains affiliate links. As an Amazon Associate, I earn from qualifying purchases.

I developed these delicious gluten free mince pies after somebody close to me was forced to switch to a gluten-free diet for health reasons just before Christmas.

I think that Christmas has to be the worst possible time of year to have to adopt a new diet under such circumstances. There are so many treats flying around to get tempted by. It’s like rubbing salt into a wound to have to keep turning things down because they no longer agree with your body.

I did my best to cater for the new dietary requirements and managed to pull a gluten free Christmas Pudding, gingerbread cake, Christmas cake, mince pies and sausage rolls out of the bag. Albeit with variable degrees of success.

When it comes to mince pies, I have a recipe for the pastry that I always use. I’ve been using it for well over a decade. So last year I adapted that recipe to turn it into gluten free pastry and enable these gluten free mince pies to be made.

These were a very successful bake (the sausage rolls less so).

These Gluten Free Mince Pies encase juicy mincemeat in a sweet and nutty pastry that is crisp and crunchy. It also holds its form well and doesn’t fall apart once bitten into.

I’ve despatched these Gluten Free Mince Pies to various friends just to be certain I’m not fooling myself. The word back?

I’ll take that as an A-okay for these little pies. And yes, the chance to scoff some modern-day gluten-free pastry is not to be passed up.

I’m no expert when it comes to gluten free baking, but I am a keen learner. And I will never publish a recipe that I feel compromises flavour, texture or any other accolade a mince pie might own.

I do have some advice and notes to share regarding these gluten free mince pies though:

Pile whatever mincemeat you favour into these gluten free mince pies. I use my vegan mincemeat recipe, but quality ready-made is perfectly fine too. Just ensure you check all mincemeat ingredients are gluten free too.

On a purely trivial note are you playing #Whamageddon? I have to say I am not. I grew up when Wham was the band for teenage girls to follow and not to have this song play throughout December is like denying my youth existed. Last Christmas is on my Christmas Playlist. If you feel the same, play it with abandon whilst making these Gluten Free Mince Pies and join me in Whamhalla. 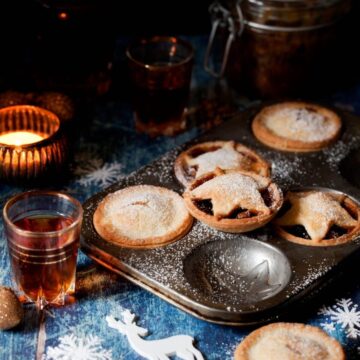 I recommend making this recipe by hand. I have not tried it out in a food processor, but my feeling is that it would be easy to overmix this pastry.
Tried this Recipe? Pin it Today!Mention @littlesugarsnap or tag #littlesugarsnaps!
(Visited 41 times, 1 visits today)