Vanilla French Buttercream has a texture as smooth as silk and a sumptuous flavour reminiscent of classic custard. It is rich, dreamy and decadent, making it an exemplary choice of topping to turn a simple cupcake into something really rather special.

My buttercream repertoire has expanded massively since I got a stand mixer earlier this year and I’ve fallen headlong in love with Swiss, Italian and now French buttercream.

I came across a recipe for French buttercream by chance a few months back and I knew I had to try it. To begin with, my mind started flitting between all sorts of fancy creations that I could pair it with. Then, when I made my first batch, I quickly realised that where French buttercream is concerned, less is most definitely more.

Classic French buttercream is the richest, most decadent of all of the buttercreams I’ve worked with.  The flavour is striking and the colour is magnificent. When enhanced by a touch of vanilla, this buttercream, in its simplicity, manages to deliver a massive wow factor. Think creamy, silky & smooth with the delicate and downright delicious flavour of classic custard.

I toyed with the idea of creating a trifle inspired cupcake, but in the end, I decided to scale back my ideas completely. Paired with a classic vanilla cupcake this impressive buttercream hogs the entire spotlight. This combination is nothing short of:

Of course, chocolate or coffee cupcakes would be other worthy partners for this vanilla French buttercream.

I have presented this vanilla French buttercream piled quite high on cupcakes and it covers approximately 6 cakes like this. However, not everybody likes so much topping on their cakes, so it’s worth noting that my recipe could easily stretch to cover 9-10 cakes if a pretty rose design is piped on each cake instead.

What is the difference between, French, Swiss and Italian Buttercream?

Swiss and Italian buttercreams are both meringue based frostings:

They are both wonderfully buttery and silky smooth. Tastewise, Italian buttercream is slightly sweeter than Swiss, but neither are too sweet

French buttercream, however, is made using egg yolks. These yolks add depth of flavour and a soft yellow colour to the buttercream.

French buttercream is the richest and least sweet of the three, but it can be harder to work with since it does not remain stable in warmer temperatures:

The egg yolks in this recipe are not cooked sufficiently to ensure pasteurisation. If this worries you, I would recommend seeking out a source of pasteurised eggs to use in this recipe or to pasteurise your own. If you are in the UK, look for the Lion mark on eggs – this mark ensures that the eggs you buy come from hens vaccinated against salmonella.

Can I Flavour French Buttercream?

Of course! If you are in the market for alternative flavourings try these:

How to Store French Buttercream

Vanilla French Buttercream can be used straight away to decorate cakes and cupcakes. Once iced, the cake should be stored in the fridge and allowed to come to room temperature before serving.

However, this buttercream can also be kept in the fridge for up to 2 weeks or in the freezer for up to 3 months. In both cases, store in an airtight container or bag and let come to room temperature before using. It will be necessary to beat the buttercream again to restore the silky smooth consistency. Beat for around 5 minutes. The buttercream may initially split, but keep on beating until the mixture reblends.

Find my recipes for Swiss and Italian Buttercreams: 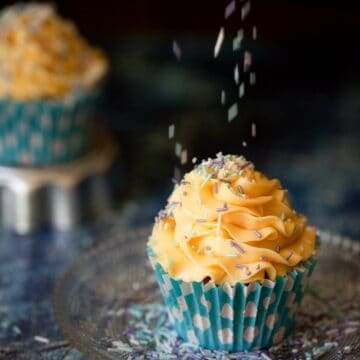 Jane Saunders
Vanilla French Buttercream has a texture as smooth as silk and a sumptuous flavour reminiscent of classic custard. It is rich, dreamy and decadent, making it an exemplary choice of topping to turn a simple cupcake into something really rather special.
5 from 1 vote
Print Pin Rate
Course: Baking
Cuisine: French
Prep Time: 30 minutes
Total Time: 30 minutes
Servings: 6
Calories: 322kcal
Prevent your screen from going dark

To use french buttercream that has been stored in the fridge or freezer, first allow it to come to room temperature then beat it with a mixer until its smooth, silky consistency returns. It may split at first, this is completely normal. Just keep on beating until the consistency is restored.  This buttercream is quite heat sensitive and does not hold up well in hot/ humid environments. Please keep this in mind when deciding whether or not French buttercream will suit your needs.