This Bourbon Peach Crisp is a deliciously luxurious rendition of a classic pudding. This peach crumble with an amaretti crumb is easy to make and it is the perfect summertime pudding.

When I first started blogging I vowed that I would always stay true to my roots and use English terminology over American. Yet here I am, several years later, presenting a recipe for peach crisp. I know, I know. Surely I mean peach crumble. How naughty of me.

The reason for talking about a peach crisp today is because I’ve used a very American drink – Bourbon – in my recipe. So I’m letting myself off the hook.

To make this dessert extra special, I’ve mingled some cinnamon spice and bourbon into those deeply colourful and highly seasonal peaches. And, to keep the topping exciting, I’ve enhanced it with cinnamon and crushed Amaretti biscuits to add an extra depth of flavour and a wonderful bite.

Although this peach crisp does contain bourbon, I’ve used it sparingly, just to help draw out the best of the peach flavour. I really didn’t want the alcohol to take centre stage.

If you’re in the mood for a more traditional recipe try my old-fashioned gooseberry crumble – pure heaven.

Amaretti are an Italian biscuit (aka cookie) typically made from almonds and/ or apricot kernals. They are light with a distinct bittersweet almond taste about them.

Two varieties exist – soft and crunchy. The soft ones pair well with a glass of Amaretto liqueur or a cup of coffee.

Though the crunchy biscuits also suit these drinks, I also adore using them in my desserts since they add a powerful hit of flavour and a satisfyingly crunchy texture.

Most supermarkets stock Amaretti – be sure to buy crunchy ones rather than the soft ones for this bourbon peach crisp.

How to Make this Easy Bourbon Peach Crisp

A few years back there was a trend in the UK for chefs to bake the crumble topping on a baking tray rather than on the fruit. The notion was that it would help keep the crumb wonderfully crisp. Some chefs went as far as cooking it a second time on top of the fruit. I recall my Mum rolling her eyes at these antics and exclaiming that they were turning an easy and straightforward fruit crumble into something much more complicated than it needed to be. I tend to agree.

My recipe works on the old fashioned principle of baking the crumble topping just once – directly on the fruit. It’s easy, fuss-free and gives great results time and again:

Creating a full-flavoured, irresistible pudding couldn’t get much simpler than this.

As I’ve mentioned, I’ve added just a hint of alcohol to this peach crumble so that the peach and amaretti flavours have a chance to shine too. If you are hankering after a more boozy dessert, try pairing it with bourbon ice cream or whip some double cream that has a shot of bourbon mixed in.

And if you really are not into bourbon, that’s okay. Just leave it out and this dessert will still bring a smile to your face.

If you like peaches take a look at these recipes too: 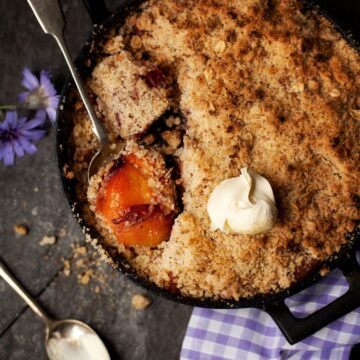 For the Fruit Layer

For the Crumb Topping