Caramelized White Chocolate Liqueur is an elegant, creamy white chocolate & vodka liqueur with undertones of caramel. It makes a wonderful addition to festive gatherings or a thoughtful gift.

This post was first published on LittleSugarSnaps in November 2017 and was updated in September 2019.

I’ve got your next winter squeeze lined up: caramelized white chocolate in creamy liqueur form.

Creamy & deliciously velvety, this drink has playful notes of caramel running through it. And it’s alcoholic.

A small bottle of Caramelized White Chocolate Liqueur is the ideal drink to stash away in your fridge ready for cosy nights by the fire or for gifting over the up-coming festive period. And I say festive period rather than Christmas because I’m thinking this drink would be a great addition to a Thanksgiving celebration if you’re in the right circle of family & friends to be celebrating that little number. As long as there’s a table groaning under the weight of party food then a beautiful bottle of this homemade cream liqueur should be gracing that precariously wobbly table.

How to Make Caramelized White Chocolate

The first step in creating this homemade cream liqueur is to caramelize the chocolate – the following 2 tips should not be ignored:

Adhere to these tips and half the battle in creating that caramelized white chocolate is over. Next, complete the following steps – the caramelization process is easy but slightly time-consuming:

During the cooking, the chocolate will not look appealing. But bear with it and you will be rewarded with a batch of sweet, creamy & complex caramelized white chocolate in the end.

Because making caramelized white chocolate is a labour of love, I recommend making a big batch of it ( maybe… oh… um… 300g) and storing it away to dip into when you feel the urge to create something with it.

Initially, I couldn’t decide whether I should be using vodka or rum as the base alcohol for this drink so I made a small batch of both. The good news is that both drinks were delicious. Hoorah. But I’ve gone with vodka as my final judgement. Though I found it shocking, I did feel that the vodka created a slightly mellower liqueur than the rum. But if you are not a vodka drinker just switch out the vodka for dark rum.

And now I’m thinking about bourbon. Should I try it? Race you…

The recipe I’m giving today uses just 50 grams of the caramelised chocolate, which is enough to make approximately 300ml of this alcoholic liquid bliss. Of course, you can scale up (or down) the recipe depending on your requirements. Please keep in mind, though, that this homemade cream liqueur contains fresh cream and no preservatives, so its shelf life is naturally short. 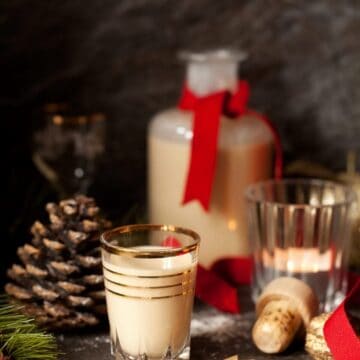