Re-ignite the summer feeling once the weather cools by keeping a jar of Cinnamon Bourbon Cherries on standby. These cherries will liven up dessert, garnish your weekend cocktail or make the perfect edible gift.

Prepare yourself. I’m about to start declaring my undying love for cherries again.

When a love is so deep and pure as the love I have for fresh, ripe, dark & beautiful cherries, I find it hard to accept that they are in season for just 6 weeks of the year. Yes – just 6 weeks.

Fortunately for me, my local farmshop does stock frozen cherries year-round. And I do regularly use them in smoothies and compotes. But when cherry season hits, I do like to make something with the fresh produce so that I can dive into it when the weather turns chilly in the autumn. My obvious salvation is cherry jam, but this year I’ve also put aside a jar of Cinnamon Bourbon Cherries.

How to Make Spiced Bourbon Cherries

These cinnamon bourbon cherries are as straightforward and alcoholic as they sound: fresh, pitted cherries are cooked briefly in sweetened bourbon and gently infused with cinnamon spice.

Honestly, follow these easy steps and you’ll have a jar in no time:

When treats like these spiced bourbon cherries are this simple to make, I say life is sweet.

If you are planning on using the cherries purely to garnish cocktails, feel free to omit the cinnamon to make the flavour more universal.

How to Remove Cherry Stones without a Pitter

If you don’t happen to own a cherry pitter, fear not. The Flavor Bender has an innovative way to remove those pesky cherry stones using a piping nozzle (and a divine recipe for Kahlua Cherry Ice Cream – sigh, sigh, sigh). Hop over to see what Dini does.

Once bottled these Cinnamon Bourbon Cherries will keep for several months, making them the perfect late autumn treat or edible gift.

Bonus: the flavour of these cherries will keep on developing the longer they are left.

Spiced bourbon cherries don’t need much in the way of company . A slice of plain cake to soak up that intoxicating liquid and a little splodge of cream will set your dessert repertoire on fire.

It feels good to know that I have my secret love tenderly tucked away in a little jar ready for the autumn. And with a pot of Amaretto Pears also sitting primly in my fridge, I feel I’m doing fruit justice right now. Of course, my mind is now in overdrive concocting more fruit-alcohol marriages to make before the summer is out. If you have a good combination, let me know – I have plenty more jars to fill.

Have you made these cinnamon bourbon cherries? Let me see by tagging #littlesugarsnaps on Instagram when you upload your picture. 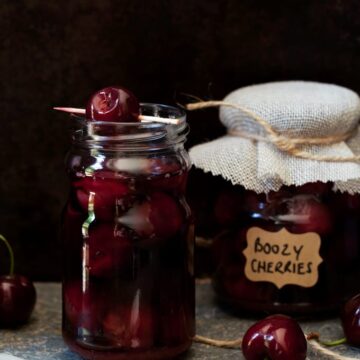 Pack the cooked fruit into a sterilised jar with a small neck since it is easier to wedge the cherries tightly to stop them floating to the top of the jar. if using 2 smaller jars, break the cinnamon stick in half and add a piece to each jar.