Coffee with Blackcurrant & Almond is a fantastic flavour combination. Try it in my liquid dessert or in my liqueur coffee. Both recipes are quick & easy and perfect for a cosy night at home.

It definitely has been one of those weeks for me. I really wasn’t sure if I was going to manage to get a recipe out to you at all. But here I am, and I have not one, but two treats for you to make room for.  It is nothing short of a miracle, but more on that later. The recipes…

I’ve teamed these two recipes up because they include the same flavours: Coffee with Blackcurrant & Almond. However, the drinks are presented in totally different ways: one I’ve classed as a liquid dessert the other is an unusual liqueur coffee. Both are like a cosy hug in the middle of winter. I could imagine myself sitting in a big country house, enjoying either one of these drinks in front of an enormous log fire and feeling very content with life.

However… back to real life. I do not live in a mansion. I cannot sit around all day doing cross stitch and getting slowly drunk. It is only 11am… boo. I’ll just make believe I’m sipping one whilst I write.

I topped this heady mix of Coffee with Blackcurrant & Almond with some very lightly whipped cream, which balances the sweetness of the drink nicely.  It is a sweet, indulgent drink to linger over, so in my mind, you could use it in place of dessert.

The liqueur coffee uses the same flavours, but the blackcurrant is much more subtle. It’s a dark, warming glass of sweet coffee heaven with an intriguing nutty, fruity edge.

And the reason the week has been a toughie? Do you remember that I told you I’m a bit technically challenged when it comes to computers? I switched to self hosting my blog on Monday. I thought I’d worked out all the things to watch for, but no, I was in for a surprise.  As soon as the switch was made all my images, page & post links on places like Facebook, Pinterest, Foodgawker etc came crashing down. Big headache. I’ve spent all week trying to repair those severed links and generally feeling frustrated. I’m mainly there now, pheweeee.

(Apologies if you have had difficulty viewing the site this week – it should be better now.)

On the positive, we have had snow – just a tiny bit – but enough for my girls to throw a few snowballs at me. Oh, and the weekend is nearly here. Which version of Coffee with Blackcurrant & Almond should I go with – the ABC Liquid Dessert or the Blackcurrant & Almond Liqueur Coffee? Tough decisions never end. Which will you try first? 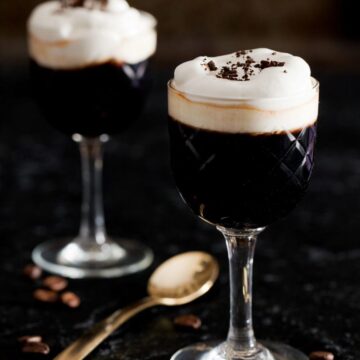 Jane Saunders
Coffee with Blackcurrant & Almond is a fantastic flavour combination. Try it in my liquid dessert or in my liqueur coffee. Both recipes are quick & easy and perfect for a cosy night at home.
I recommend you serve the ABC Liquid dessert at room temperature, so dig out the alcohol from that chilly store cupboard ahead of time if you need to.
5 from 1 vote
Print Pin Rate
Course: Alcoholic Drink
Cuisine: Worldwide
Prep Time: 5 minutes
Total Time: 5 minutes
Servings: 2 servings from each recipe
Prevent your screen from going dark

For the ABC Liquid Dessert

For the Blackcurrant & Almond Liqueur Coffee

For the ABC Liquid Dessert

For the Liqueur Coffee