This Coffee Brandy Alexander cocktail creates a luscious yet serious creamy cocktail to savour. A hint of coffee and a waft of chocolate accentuate the silky cream and mellow brandy in this remake of the classic drink.

Contents hide
1 What is an Alexander?
2 Ingredients
3 How to Make This Drink
4 What’s the Difference Between Brandy and Cognac?
5 Coffee Brandy Alexander

I do have a soft spot for the occasional creamy cocktail in the cooler months and this Coffee Brandy Alexander is my idea of Friday night heaven right now. What’s not to enjoy about the combination of coffee with brandy?

Mixing coffee with brandy is not a new pairing. It’s a popular choice, especially in hot coffee drinks. But today, I’ve taken it in a cool and creamy direction, basing it on the classic Brandy Alexander cocktail.

Like the look of this? Then you’ll probably enjoy my Baileys espresso martini too.

What is an Alexander?

The first noteworthy point to take away about the rather vintage Alexander drink is that there are two types of classic Alexander cocktails:

Egg white, though not compulsory, is often added but a light dusting of grated nutmeg to round off this libation with a sweetly spiced aroma is more or less considered mandatory.

As the years rolled by, bartenders got experimental with other spirits and it wasn’t long before the Brandy Alexander (#2) knocked the original drink off its pedestal.

The brandy riff appears to have emerged around 1937 and was originally called the Alexander #2 before the more self-explanatory term Brandy Alexander was coined.

This libation enjoyed a revival in popularity in the 1970s and remains highly regarded today. It’s a true classic.

Unlike the original recipe, there tends to be a heavier measure of cognac compared to the sweet liqueur and cream. This enables the mellow undertones of the brandy to continue to shine through rather than getting overpowered by the other sweet and decadent ingredients.

My coffee brandy Alexander cocktail substitutes ¾ of the creme de cocoa for coffee liqueur. This simple swap means that the sweetness and creaminess of the cocktail are both unaffected.

There’s still a hint of chocolate in the mix, but the flavour of coffee with brandy definitely comes through brightly.

Lookswise, these drinks are virtually identical since coffee liqueur and dark creme de cacao are both very dark brown. Believe it or not, there’s one of each in the following image.

To mark the difference, I suggest adding a coffee bean to the coffee brandy Alexander along with the nutmeg. I went slightly wild and added a chocolate wafer to my classic brandy version.

How to Make This Drink

This coffee brandy Alexander cocktail is an incredibly easy and straightforward drink to make. Simply add a large handful of ice to a cocktail shaker and pour in the alcohols and cream.

Put the lid on and shake vigorously for 30 seconds to ensure the ingredients are both well chilled and suitably diluted.

Pour into a cocktail glass and garnish with a grating of nutmeg. Add optional embellishments such as coffee beans or a chocolate wafer if desired.

If you’re feeling extravagant try serving with a slice of chocolate salami alongside.

What’s the Difference Between Brandy and Cognac?

Brandy refers to a distilled spirit made from fermented fruit juice. It can be produced using grapes or other fruit. (think of the apple brandy Calvados for example). It can also come from anywhere in the world.

Cognac, however, is a brandy that must be made from white grapes and it must come from the Cognac region in Southwest France where the natural growing conditions, or terrior, are known for their superiority. Cognac must be aged for at least 2 years in French oak.

In a nutshell, Cognac is brandy but not all brandy is Cognac.

Both brandy and cognac can be sipped neat but they do also lend themselves to plenty of cocktails. Have you tried the Sidecar yet?

With spirits, I always recommend buying the best you can afford and for this creamy coffee brandy Alexander cocktail I selected Martell VSOP Red Barrel Cognac.

Aside from adding different flavours to the drink such as coffee, it’s also not uncommon for bartenders to play around with the base spirit in this drink. In other words, replacing the brandy with another potent liquor.

Here are a few of my favourite riffs on the Brandy Alexander cocktail:

In the Mood for More Creamy Cocktails? Try these: 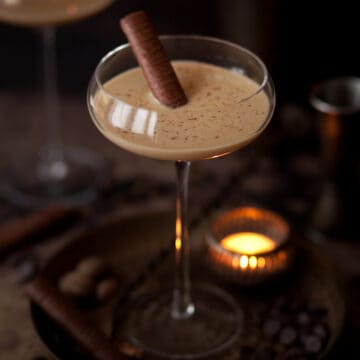 For the Coffee Brandy Alexander

For the Classic Brandy Alexander

For Both Cocktail Variations