Vegan rice pudding with spiced pears is a comforting treat. A clever blend of vegan products and warming spices delivers heaps of flavour and a heartwarming, family-friendly dessert. It can even be made ahead and reheated.

If you are in the market for a bowlful of something sweet, comforting, filling, creamy and flavoursome try my vegan rice pudding recipe with spiced pears.

Why this Vegan Rice Pudding is Worth Making

Dairy-based rice pudding often relies on butter and egg yolks to give a creamy and rich finish to the dish. Since those ingredients are not consistent with a vegan diet, I’ve worked hard to develop a vegan recipe that is just as decadent:

Topped with some roasted spiced pears this is an easy non-dairy dessert to wheel out on a regular basis.

A full batch can also be made and stored for later use, so it’s a great make-ahead dessert.

Each and every ingredient in this recipe plays a vital role in creating a dessert that is just as creamy and luxurious as any dairy-based counter-part.

For that reason, I urge you not to leave out anything, especially not the salt and coconut cream. These really do boost both flavour and texture immensely.

Almond milk is my preferred non-dairy milk in this vegan rice pudding recipe. It is neither too thin nor too rich and gives the ideal final consistency.

Note: If you do not intend to make the pears, then you do not need to purchase them, the maple syrup or the chai spice.

This recipe contains two separate elements: the rice itself and the spiced pears. So I’m including step by step instructions for both parts.

Of course, you are free to add any topping you fancy to the rice pudding in place of the pears. But if you intend to make the pears get them into the oven before starting to cook the rice and both elements will be ready around the same time.

How to Cook The Rice

Vegan rice pudding is just as easy to make on the stove-top as the traditional version. Don’t rush the cooking by boiling ferociously – a gentle simmer will not only suffice, but also ensure the best creamy texture is achieved:

Step 1: Put the rice, sugar, orange zest, salt, vanilla pod and spices into a medium-sized saucepan along with the almond milk

Step 2: Bring to a gentle simmer over a moderate heat. Let cook for 20 minutes, stirring frequently, then check the consistency of the rice. It should be firm but soft and easy to chew, without feeling gritty. Allow to cook for a few more minutes if not sufficiently cooked

Step 3: When ready, remove from the heat. Take out the vanilla pod and scrape any seeds back into the pan. Stir through the butter followed by the coconut cream

How to make Spiced Pears

These roasted spiced pears are simple and quick to prepare:

Step 1: Peel the pears and cut them in half, then scoop out the tough core from the middle. A melon baller is a great tool for this task but the end of a teaspoon will work just as well

Step 2: Mix the chai spice with the maple syrup and a little freshly boiled water. Toss the pears in the liquid then lay on baking parchment, drizzle over the remaining liquid, cover in foil and cook for 15 minutes

Step 3: Turn the pears and baste with the liquid in the bottom of the baking tin and cook, uncovered, for another 15 minutes until the pears are fork-tender

Note: use the pears within 12 hours since they do discolour quickly over time, even if stored in the fridge.

This vegan rice pudding recipe is particularly easy on the skill front. But here are my top tips to ensure you achieve a wonderfully creamy and full tasting dessert:

Do I have to use Almond Milk?

No, you don’t. You can use an alternative dairy-free milk in this vegan rice pudding recipe, but do keep in mind fat and sugar levels.

I personally would not recommend using rice milk for this recipe since it is very light and will not add much creaminess to the recipe.

In contrast, coconut and cashew milks are more creamy and may be too cloying for this recipe.

Oat milk is a good nut-free option, but since it is sweeter than almond milk, I’d suggest reducing the sugar in the recipe by half.

I chose almond milk because it has a delicate taste that would not overpower the other flavours in this dessert. Other kinds of milk will add a slight variation to the flavour, so please bear this in mind.

How do I store and reheat it?

Any rice pudding that is leftover should be cooled to room temperature and stored in the fridge in a sealed pot for up to 48 hours.

Reheat in a pan until piping hot, adding extra milk as required to loosen the mixture to your desired consistency.

Is this recipe suitable for freezing?

The consistency of this dessert is at its prime when freshly made and served. Leftover rice can, however, be frozen.

Sadly, the pears need eating quickly and do not freeze well.

Can I use leftover cooked rice?

Though some people may approve this suggestion, I cannot recommend using leftover rice in this recipe.

Rice that has been pre-cooked should already be cooked to perfection and in getting to that stage, it will have absorbed a great deal of liquid. Adding more liquid (the milk) will push the rice itself into the mushy territory and will not result in such a deliciously creamy texture in the dish overall.

If pears are not grabbing your attention try the following vegan options:

Have you made this vegan rice pudding recipe? I’d love to know how you got along. Leave me a comment, rate the recipe or post your creation on Instagram, tagging me @jane_littlesugarsnaps. 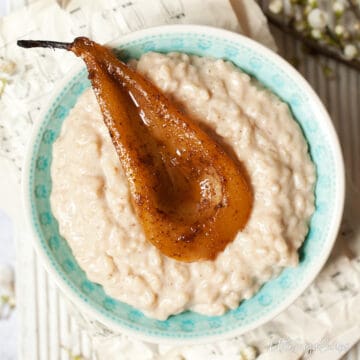 For the Vegan Rice Pudding

Adjust the consistency of this rice pudding to suit your taste. For a thicker dessert reduce the milk by 50ml and for a looser end result add a splash of additional milk once fully cooked until the desired consistency is reached. If left to stand this dessert will thicken as the rice will continue to absorb the liquid. Just add more milk as necessary to loosen it again.